So, How Did I Get Started On Sax?

Well, way, waaaay back in the 6th grade, I started playing in school band. I got assigned the tenor sax because of my size, not my choice. I'd have picked alto.

Our band teacher was a guy named Jack Farina at a small-town parochial school in Wisconsin, Beloit, to be exact.

I played for about six months until my Mom ran out of money and only one of the three of us kids could play anymore. That benefit went to my sister, who won the Saxophone War of 1975. I won't go into further detail, but I was so pissed off that I didn't play again until after my Mom died. (I didn't realize that was the way it was until a year or so after I started again.) She of course QUIT a couple of years later.

In 1994, I saw a tenor sax just like what I had played in grade school in a Beloit pawn shop. That was the day I bought Bello, my 1966 Selmer Bundy, for $96.00. He promptly got stuck away in a closet for ten years. I was living in a small apartment and had no where else to play, so I figured I'd get to it "later," after I moved somewhere it wouldn't annoy the neighbors.

About two months after Mom passed away, I decided "later" was late enough, and found a part-time teacher at a local music store. My teacher was gentle about it, but my sax was really in barely-playable condition. There were dents that were causing valves not to seal all the way, the cork was glued to the inside of the antique mouthpiece, and the leather valve pads were chewed up from a past insect infestation of some sort. That was just for starters. The neck strap was also old and had a metal hook that was wearing out the strap attachment hook on the sax. So, $250.00 and two weeks later, most everything is up to snuff. There are still a few quirks, but otherwise, he plays great.

So now I've been back at it a little over five years...

Dan
Posted by AquarianM at 8:37 AM 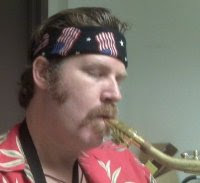 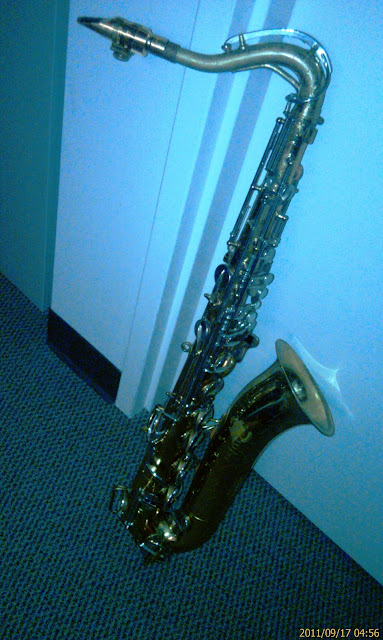 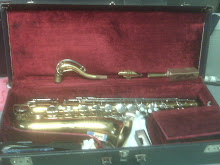 Available books of poetry
by Daniel A. Stafford:

Poetry/photography of a beautiful place

13 poems all around life

At the edge of sand and surf

Ghosts of the Fall

54 poems of Halloween & the Fall season

15 poems to raise your energy level.

The above links are all to the e-book versions of these chapbooks.
For paperback versions and to view a listing of all my books as they are released click HERE: Dan Stafford's Poetic Universe

AquarianM
I've been a technology & science geek since I saw the Apollo Moon landing in 3rd grade Summer school. Radar tech at 17 years old, 21 tears in Telecommunications, building web sites in Blogger & Wordpress, PC repair, and lately, studying and teaching Information Technology. I'm a one-tour Air Force veteran and a member of Civil Air Patrol. I have written poetry for nearly two decades, and I draw and paint a bit. Married for 19 years (so far) with one son and one stepson. I'm also a bookworm from way, way back, and love hard science fiction, space operas, and fantasy.